City tour refers to a program for circulation of the city allowing you to tour various cultural relics, tourist destinations, and present situation of municipal administration scattered in the city, and look around the city's culture, history, and tourist destinations. It is a popular tourism product in major cities in the world. Learn more 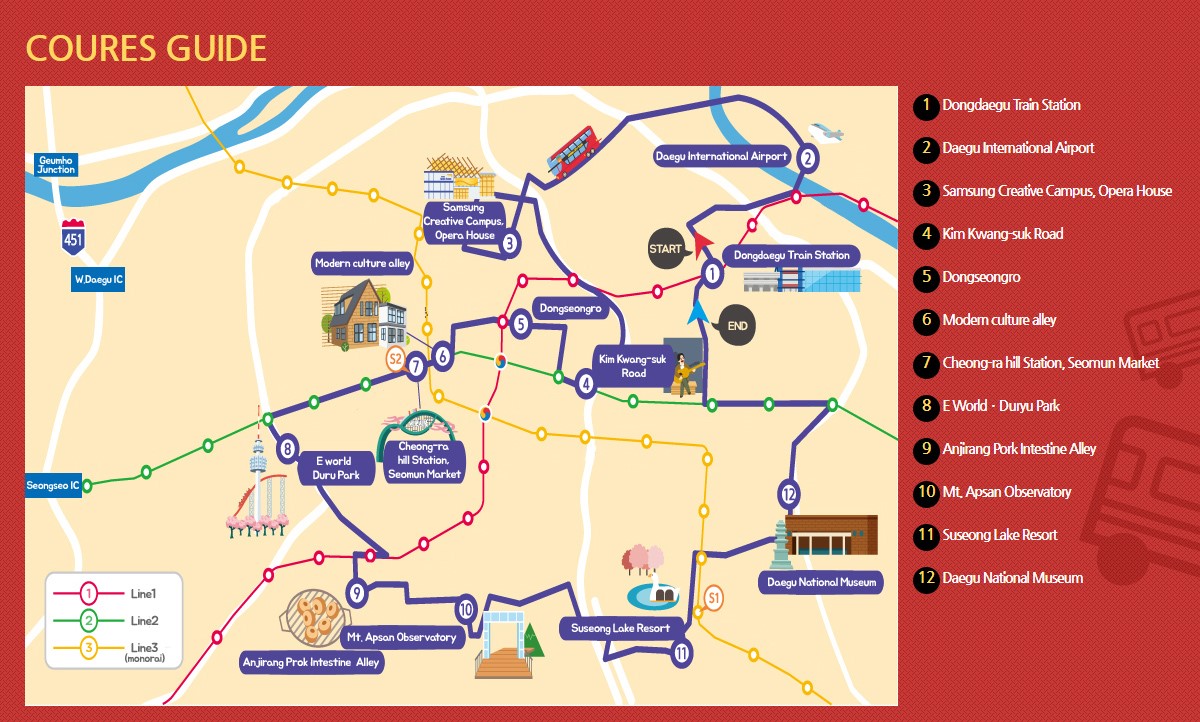 On the Daegu City Tour Course

Modern Culture Alley is the place where visitors can experience both modern times and present day of Daegu. There are many historical spots of Daegu so it is more meaningful.
Modern Culture Alley composed with five different courses and each course has its concept. Each course normally takes about 2 hours.
On the website you can apply a tour guide service for free.

The Daegu Tower (height 202m) is located on European style theme park inside Duryu Park. It is a tourist attraction where you can look over the whole city of Daegu. The traditional architectural beauty of the tower has been reproduced and its Dabotop pagoda shape has been recreated. The west part of Daegu Tower has Duryusan, Seongdangmot and Daegu Culture and Arts Center where the tourists could enjoy various performances, exhibitions and events.

Seomun Market is the biggest market in Daegu and the market boasts a long history and a deep-rooted tradition. Recently, Seomun Market opened a night market and now it became one of Daegu’s major public and tourist destinations, the market offers a wide range of merchandise and street food and serves as a venue for various public performances and art exhibitions.
Seomun Night Market opens every night from 19:30 to 24:00 (or until 24:30 on Friday and Saturday nights).

Suseong Lake is the best ecotourism place with a nice path including a wooden boardwalk, allowing for visitors to take a relaxing stroll around the lake or join in a pedalo. Surrounding lights give the lake a warm, comfortable feelings.
Also, the installed visual music fountain provides nighttime performances twice a day from May to October and it provides unique attractions.

It is the famous mountain popular with both of Daegu citizens and visitors from other areas. Palgongsan is a beautiful mountain every 4 seasons so it is good place for hiking and driving anytime.
There is famous buddha named Gatbawi and it has a nationwide reputation as a relief and faithful place where one wishes can be heard when praying to Gatbawi Buddha.

There is a unique building at the point where the Nakdonggang river and Kumhogang rivers meet. It is also called as the Four Rivers Cultural Center and it is a different exhibition space as a building and an artwork. The ARC is designed by Hani Rashid, who has won a prestigious award for world-class architectural design. It is also a good place to ride a bicycle and it became the rising sightseeing spot because of its beautiful night view. 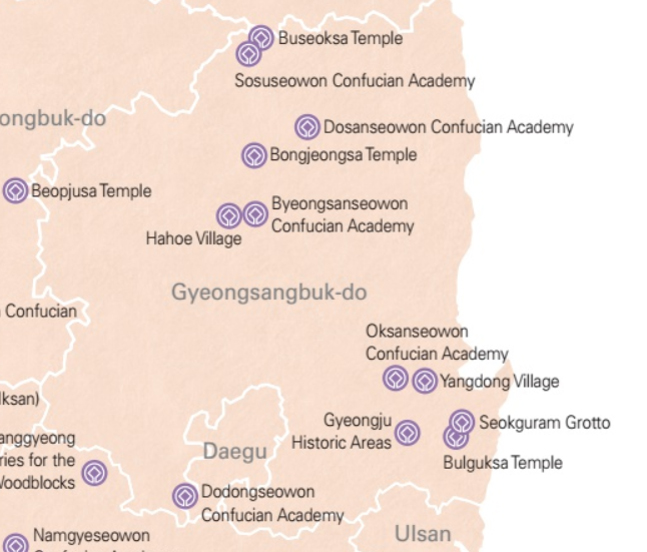 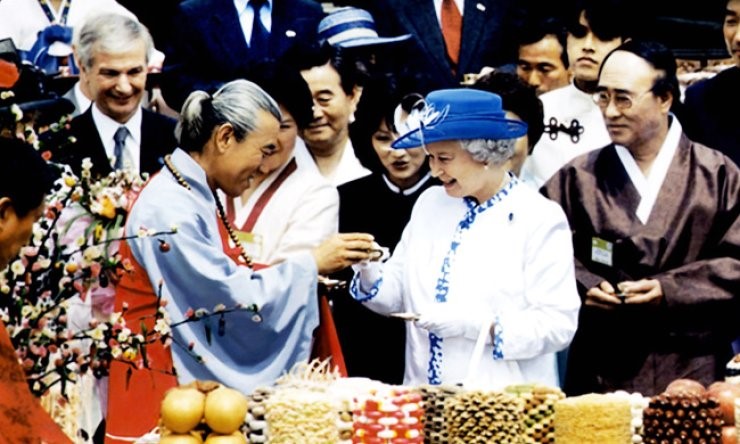 Queen Elizabeth II celebrates a toast with a Buddhist monk during her 73rd birthday at the traditional village of Hahoe in Andong, North Gyeongsang Province, in 1999. / Korea Times file 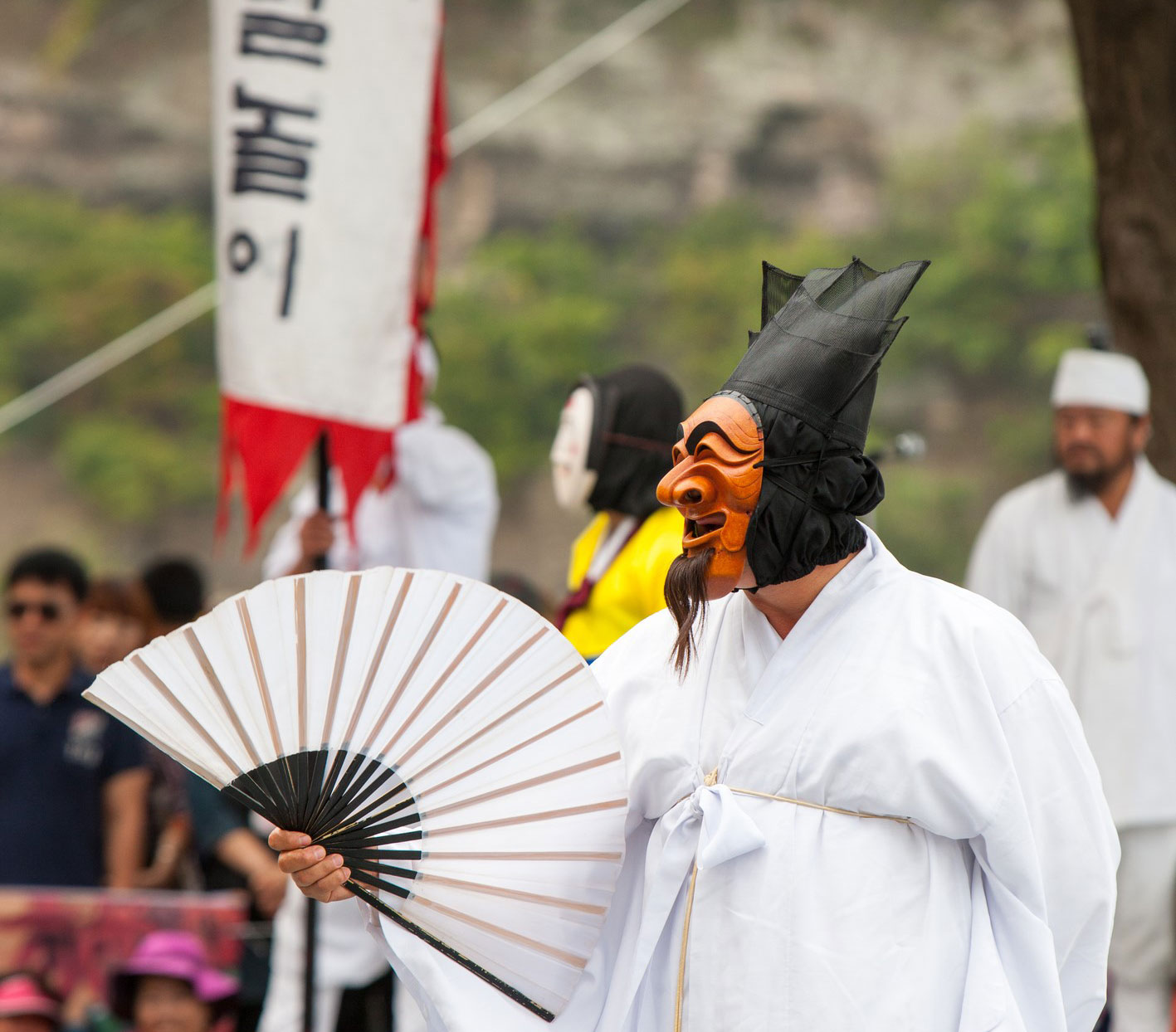 Past and Present, Future All Exist Together

Andong - the home of traditional Korean culture - is blessed with various cultural heritages from virtually every period of Korean history. There are many wonderful wooden cultural artifacts, which had preserved the memories of the past, allowing us to appreciate the culture of Korean ancestors.People have lived in this area, since the ancient times, and as a result, the richness of Korea’s magnificent folk culture has been integrated into Korean daily live. Moreover, Korean spiritual philosophies, such as Buddhism, Confucianism and Christianity have accumulated over the centuries like layers of sedimentary rock. Understanding the culture of Andong means understanding that of Korean culture as a whole, and experiencing the spirit of the Orient.

Her Majesty Queen Elizabeth II remarked that she spent a marvelous time here, which began with her journey to the Hahoe Folk Village, followed by visits to ancient houses and temples. She observed the making of gochujang(red pepper paste) and kimchi, traditional farming with and ox-drawn plow and authentic Korean mask dance.

A traditional Korean delicacies were prepared for Her Majesty’s 73rd birthday - a touching moment for her. She repeatedly remarked : “Very good! Wonderful!”even raising her glass for a toast.
Her Majesty’s special visit confirmed that Andong is ‘Korea in Miniature. ’It is indeed a place well worth a visit. Learn more